A project marked by excessive and tedious repetition; I have finally finished my collection of Peter Pig walls.  Over the years I had been slowly buying a set here and there when I would place other orders.  I even went so far as to contact them for a special order of just the long straight wall sections.  (which they very nicely obliged) The walls are the Peter Pig "High Walls" found under the Normandy Stuff section of their scenery.  They are resin and each pack contains 5 pieces, 1 Long, 1 Long with a breach, 1 medium and two short lengths.  I also picked up 3 packs of their doors.  The walls are a brick and stucco design that is pretty universal and useful to this day.  The doors a mixture of wooden and metal designs.

In the end it took a couple weeks, (mostly due to my incredible slowness) but it is done.  Over 22 feet of walls and a foot worth of doorways. 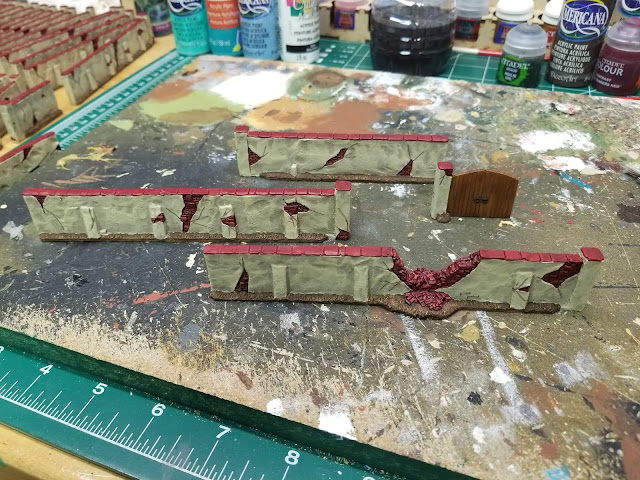 Are You Ready For Some Football?

Our gaming group routinely has outbursts away from the core historical(-ish) games that make up the bulwark of our gaming.  Blood Bowl is one of these great asides.  A few years ago Games Workshop re-released Blood Bowl.  It must have been a success as they have continued (although slowly) to release more and more miniatures for the various teams.

I enjoy Blood Bowl but will be quick to tell you that I'm not very good at the game.  There are players in our group who compete using teams with much more thought out strategies.  I, on the other hand, play the perpetual bottom-feeders: Goblins.  I find it enjoyable to play a team that can be expected to lose, it keeps me from getting to heavily invested in the competition.  The greatest joy is the wild collection of illegal weapons they can wield (before getting caught and sent off).  Nothing beats chainsawing apart an opposing player that you lack the strength to even attempt to block.  Or lobbing a bomb into a nicely set up cage.  The re-release also gave the Goblins two new players: the Doom Diver and the Ooligan.  I've yet to play a game with these new models, so it will be exciting to see how they fit in. With the exception of two trolls that I use to anchor the center of my line, the rest of the normal players are largely useless speedbumps.

The new models are spectacular.  There are a lot of great details and character, even amongst the normal goblins.  The Forge World troll (#20) adds some distinction between the two big men, and if you believe the rumors, was also a swipe at people who complained that every big man in Blood Bowl was modelled with "one leg in the air".

I can now retire my old Gobbo team.  I painted it about 10 years ago, and until this team might have been the last 28mm (heroic?/32mm?.... basically whatever size GW is) figures I painted before diving off into 15mm and smaller historicals.  They'll be stowed away unless someone else decides they want to be my rowdy friends. 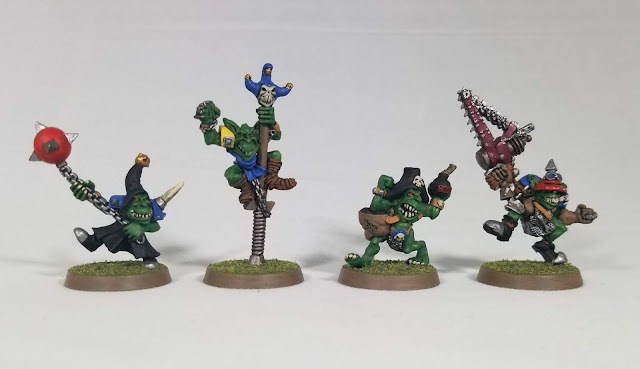 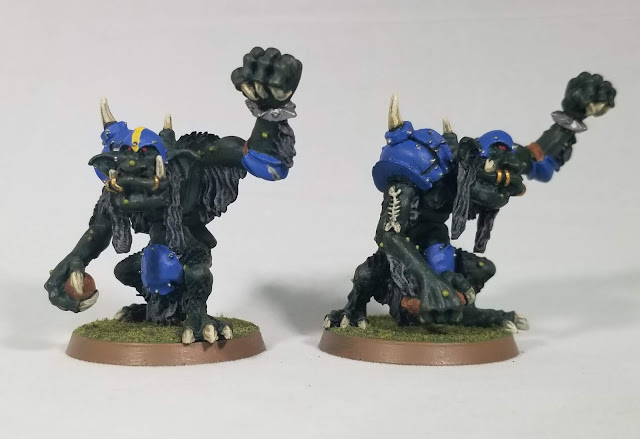 While the age of fighting sail has always been a staple when it comes to my earliest memories of wargaming, I knew very little about it when I started to revive that memory a couple of years ago.

So with my lack of knowledge I took the cautious approach and... went straight to GHQ and hit BUY BUY BUY!!!!

After my fervor died down I did a lot of Google searching, hit up TMP and bought some books on the period.    Probably the best find for me was Langton Miniatures.   Not only do they sell a lot of fine miniatures, they even sell the odd ones that GHQ doesn't.  More importantly, they sell  A GUIDE TO: Assembly, Painting & Rigging of Napoleonic Naval Models in Scale 1:1200.  While that might be a mouthful, the content is immeasurable.

The book covers...  well everything it says in the title.  As far as painting goes, it has diagrams to point out all the parts of the sails and hull.  Further, it goes into listing how each part could/should be painted.

As mentioned before, I have scoured the internet in search of French military equipment to expand my little reaction force.  I even reached out to a number of people who produce models, but never received replies.   That was until the man of the hour, Luis Glehn, hit me up with the encouraging words "Give me a few days and I should be able to do it".   True to his word, he delivered and I can't thank him enough.  He has a Shapeways store Small Scale Shop with over 250 items.  I highly recommend his work, and it's hard to beat someone who will go out of the way to simply create the things you need.


I'm really excited, as having models of these will really allow us to wargame the forefront of French military involvements. As well as many hypothetical engagements.


The French "Armored Infantry Fighting Vehicle", (such an original name), leapt the French military into the world of massive but maneuverable IFVs. Standing in about a meter taller than the VAB and well over a meter than the AMX-10P, this is a real beast.   Armed with a 25mm dual feed cannon and a co-axial 7.62mm machine gun, it's standard form also packs a little more punch than the standard AMX-10P that it is replacing.  The vehicle was designed to be fully integrated with the new integrated vehicle information system as well as the FELIN system.  The VBCI has a crew of three and can carry an additional 8 people. (7 men being the standard squad size)

So, quite clearly I've not posted anything in a while.  And while normally you can attribute this to pure laziness, this time I've actually been doing some work at painting.  In spite of my terrible work schedule, I plugged through roughly 100+ figures, 22 animals and 4 vehicles.  These are all inching me toward finally running my long talked about mini campaing.  But there is always still so much more work to do.

*These are just samplings. (as photographs of the same figures wearing the same or slightly different clothes seemed pointless)
**Apologies for the photos, I am working through using a new camera set up. 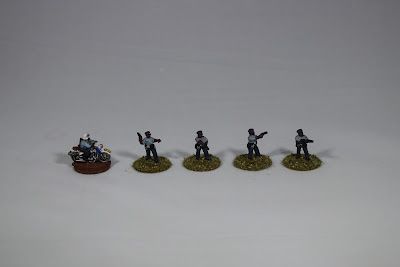 Dusting Off A Classic


Our group had previously played through 18 of the 27 missions included in the Star and Pyramid campaign book for the Check Your 6! Jet Age rules.  It has been well over a year since the last time we played any of the missions.  As a testament to how easy the rules are, we got 6 players through this game without problem. 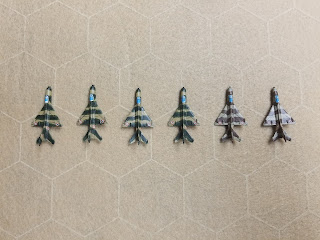 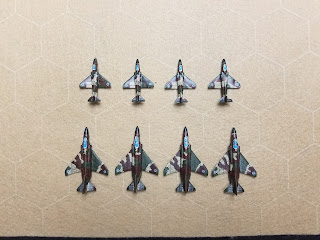 
The Israeli orders were simple, the 2 F-4s loaded out as bombers were to hit the runway, while the A-4s bombed the airbase facilities and command center adjacent to the runway.  This left 2 F-4s to cover the bombing run, entering a few turns into the game.

The Egyptians mission was also straightforward: keep the runway from being bombed, while destroying as many Israelis as possible.

For the most part this section and the models contained in it are just for wargaming eye candy.  There is no real or realistic need to place a model of a jet or helicopter striking from long range on the table. Their effects are represented by generic in-game rules, but I like the completeness that they bring to the force.... and there is the outside possibility that they might, for some reason, appear in some other state in the game. The transports, on the other hand, will almost certainly be on-board in games.

The camouflaged helicopters were painted by me, using the exact same paints and techniques as I used on the vehicles. 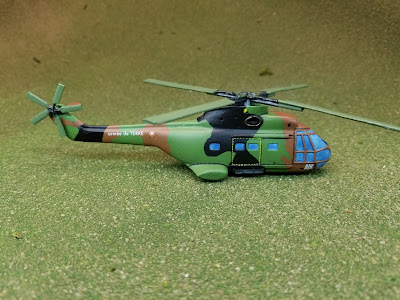 The Aerospatiale SA 330 Puma is a medium transport helicopter, carrying up to 16 passengers, flown by the French Army.  It can also operate as a gunship, mounting a 20mm cannon from the side door.  It is fast and durable, being able to operate fully loaded, with just one operational engine. There are increasingly less numbers in operation with the NHIndustries NH90 replacing it.